So folks we come to the end of July & it’s time to start the long drive back home. I’m not going to give a diary of our holiday, it’s much the same as everyone else’s, save to say we had a wonderful time with the family all together.

One story though of an  unusual encounter with a ‘healer’ for Mikes herniated discs. In short, a little old Turkish lady who could have been 55 & aged harshly, or 355 & aged well. She was 4ft & a cross between Yoda & ET ( as we had been told). She came highly recommended & apparently receives medical referrals which was reassuring.  We drove 4 hours to her place, luckily on our way to Alachati for a couple of days kite surfing, an hour or so further north. Rick & Chris hovered quietly outside while Mike, Aysegul & I entered the wizards hovel. They later said there were strange animal noises in her garden . Chris decided she was keeping a baby dragon as a pet!  Mike lay on the strip a carpet on the floor & she proceeded to examine his back , immediately pinpointing the problem areas. Her treatment method can be described as a cross between osteopathy, chiropractic & wrestling. It was extremely vigorous, & Aysegul & I clamped our hands over our mouths in horror. Anyway when she finally asked him to stand up & walk round, he had a grin from ear to ear! It was fixed!  He wasn’t prepared to say by how much until he’d had more time to assess after sitting in the car, moving around etc. But I think he felt it was 90 % better immediately, & set him well on the way to recovery. A way better result than the proposed surgery, & following 30 odd injections in his btm.  A very surreal experience.

One other event which I will remember is running out of fuel at the top of a hill on a narrow country road. Just Rick Chris & I in the bus. We free wheeled , backwards, downhill (no brakes obviously). Rick leaning across the seats looking back steering with one hand, Chris in calm Captain mode with one hand on the hand brake & the other out of the window slowing down the on- coming trucks & wagons! Me in the back hyperventilating. They managed to swing it into a turning spot & with the last dregs of fuel started the engine to get us moving forward. Free wheeled down the remainder of the hill to a garage at the bottom. Such fun they thought, Men! If you’re wondering why I didn’t get out, I didn’t want to be standing alone if they went over the edge. I’d have had no lift back.

We depart Bodrum finally on 29th July, a couple of days earlier than planned, but with a contract booked for Rick to start work. We still wanted to take our time on the scenic route back.  We had some idea of the countries we wanted to pass through, but not completely decided. We’ll see how it goes.  We had an unremarkable drive north, towns we have driven through on the way, in daylight this time, but good roads. We’re stopped by the police for passports & license for the first time ever. had our last lovely chicken shish in Turkey at a fancy service station north of Izmir.

We were heading for Canneakale which I wrote about previously, but someone suggested Troy would be a good place to visit so we took a detour. We arrived in the ‘town’ on a very hot late afternoon. Tumbleweed could be seen rolling down the street.  Just a couple of shops/cafes & not much else. Yes you could  pay to walk down to the ruins , but we weren’t in the mood & needed to find somewhere to spend the night. A resourceful Turk had followed on his scooter to offer us his campsite, but we’d been looking forward to a lake side experience & so declined. As I commented at the time, no Helen, no Brad Pitt, & actually  bit of a one horse town!

Eventually with nothing suitable en route we took the ferry across to Esceabet & started looking for accommodation. It was getting late & darkish which always freaks me out . Most hotels were full & it was only later we discovered there was some kind of celebration in town. We asked an hotel ‘concierge’ ( loose description) where we could find a Pansyion (B&B) & he was remarkable willing to help.  He had a sister who owns a place just round the corner. He called her up & yes she had rooms available. He gave us directions & had been so kind. We didn’t actually find the sisters place, but in the general direction & just nearby we found a B&B offering room with breakfast for  50 lira (about 15 quid)    with breakfast.  The patron didn’t speak a word of English but we understood each other. In fact when we explained we would be leaving very early in the morning & not taking breakfast he gave us   20 lira   back! How good is that!?  The room was in the eaves, funny shape with triple wooden beds. Bathroom more like a wetroom but don’t think up market. This was just a shower hose in the wall & floor tiles like a death trap when wet! Once in I could hardly get out. It was VERY basic but immaculately clean.

It was dark by now so we dropped our stuff & drove back into town looking for food. We chose a busy place & sat down to order. We both did that looking round thing you do to see what everyone is eating & at about the same time said ‘ there’s no alcohol!’ Oh well we laughed it off, we can manage a meal without a drink. Ahem!  You choose your food from a counter display & it came up a huge plate of something I can’t remember except I couldn’t finish it.  As we took a stroll round town afterwards we realised none of the roadside cafes served alcohol.  nor did a couple of little shops! Hell fire! Finally found a tiny little store selling booze but limited  choice.  Never mind- beer & Raki will do thank you very much, & we trundled back to our little cheapo place to drink some in the outside eating area, making a handsome meal ourselves for the midges & mozies.  The only disruption during the night was being woken to the sound of drums at 3am! What the –  . Someone was banging a big bass drum & his matey a smaller lighter version. It  was the end of Ramadan, maybe that was why. 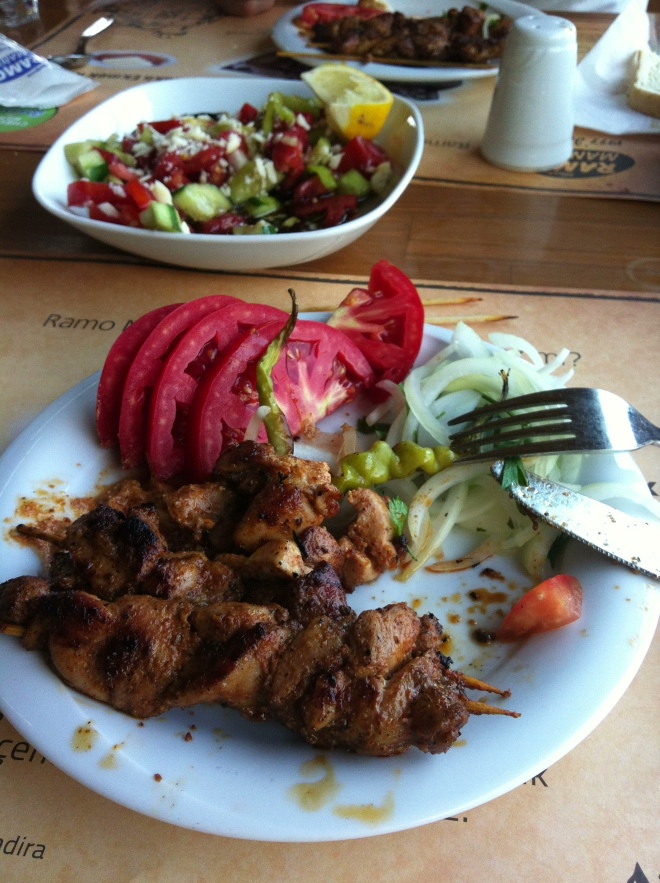